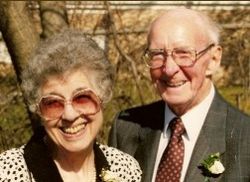 Prior to that achievement, Elwood, who was licensed in 1932 as a funeral director and embalmer, opened Manns Funeral Home in Detroit. Until his death in August of 1999, one week after his 94th birthday, Elwood and Edna continued responding to families' phone calls. Edna Manns died peacefully at home on January 3, 2012 at the age of 100.

Sons Dickson and Charles Manns have been actively running the business for decades. Charles is licensed for pre-planning arrangements. Dickson is the funeral home manager and has held a mortuary science license for over 40 years.

Now, a new generation of the Manns family has joined the business. Hilary Manns Gentry, daughter of Dickson and Joanne, states, “We believe our role is to provide information, support and guidance to help families make informed decisions about how to say farewell to a loved one and I am proud to follow in the footsteps of my grandpa and dad.”

The caring and experienced professionals at Manns Family Funeral Home are here to support you through this difficult time.  We offer a range of personalized services to suit your family’s wishes and requirements.  You can count on us to help you plan a personal, lasting tribute to your loved one. And we’ll carefully guide you through the many decisions that must be made during this challenging time.

You are welcome to call us at any time of the day, any day of the week, for immediate assistance.  Or, visit our funeral home in person at your convenience.  We also provide a wealth of information here on our web site so you can learn more from the privacy of your own home.

A year of daily grief support

Our support in your time of need does not end after the funeral services.  Enter your email below to receive a grief support message from us each day for a year.  You can unsubscribe at any time.